The Massachusetts Medievalist has been engaged in some restorative relaxation this past month or so, reading a lot of non-medieval-studies books and visiting a local eagle nest most days to check on the growing, demanding, almost-flying chicks (yes, we have two this year!).

So I was especially pleased to hear the important news that Joy Harjo will take over this fall as the newly-appointed Poet Laureate. Harjo is notable as the first Native American to hold the post; she is also intimidatingly, wonderfully multi-talented as a poet, memoirist, musician, and children’s book author.  I started with her 2012 memoir, Crazy Brave, and then spent the bulk of my Fourth of July with How We Became Human, her 2004 collection of new and selected poems.  Throughout both, I was struck by the ways she blends genre smoothly and elegantly, forcing her readers to question our very categories of poetry, prose, fiction, or memoir.  Crazy Brave includes dream visions and poetry and mythologically-infused narratives as well as more straightforward prose – in this blending of genres, I was reminded of numerous medieval texts that similarly defy attempts to place them on an “appropriate” shelf in the library. The Library of Congress catalog numbering system is no match for human creativity (irony, considering that it’s the Librarian of Congress who names the Poet Laureate). 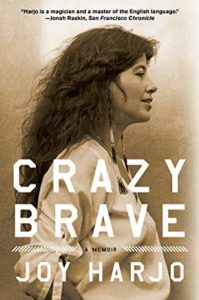 I hadn’t consciously planned to read our first Native American poet laureate on the Fourth of July, but when I sat down in the shade on the almost-too-hot summer Massachusetts afternoon, I realized it was the perfect way to deal with all the anger and frustration I’ve been feeling about the state of our nation. Like Crazy Brave, How We Became Human is a genre-bender, with prose poems, short lyrics, prayers, and episodic narratives.  Harjo’s voice consistently places her and her readers in her Creek worldview – spirits are real; time collapses in ancestral connections; stars and trees and animals are personified beings, living characters in her lyrics.  Numerous allusions to other poets and traditions pepper her songs; one of my favorites was her whispered homage to Adrienne Rich in “The Book of Myths”:

I did not imagine the fiery goddess in the middle of the island.
She is a sweet trick of flame,
had everyone dancing, laughing, and telling the stories
that unglue the talking spirit from the pages. (HWBH, 83)

The poem that spoke to me the most, in this my summer of two eagle chicks, was obviously “Eagle Poem,” part poem, part prayer, in which she celebrates an eagle that “Circled in blue sky / In Wind, swept our hearts clean / With Sacred Wings” (85). 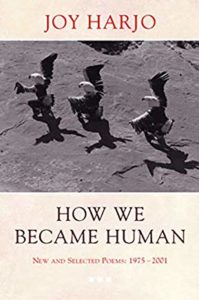