After a two-month hiatus in which the Massachusetts Medievalist recovered from the summer’s engagement with Homer, I’m back to the blog with some thoughts about Colson Whitehead’s Pulitzer-Prize-winning The Underground Railroad. Whitehead will speak at Lesley this coming Tuesday (7pm on 30 October in Washburn Auditorium). Note that I was very careful to cut any spoilers from what follows: read on with confidence whether or not you have read the novel.

Lesley University sponsored a symposium on The Underground Railroad last week, and I was thrilled to share the stage with Dr. Tatiana Cruz, who spoke on modern misconceptions and myths about the historical underground railroad, and with Dr. Clara Ronderos, who spoke about the novel’s connections to magical realism and the possibility of Whitehead having invented a new genre altogether, one we haven’t named yet.

I tried to point out connections between the novel and various literary traditions; even as Whitehead is doing something new, he’s also very aware of the ways he draws on texts and themes of the past. Many readers will see, and Whitehead has mentioned in interviews, his debts to the Narrative of the Life of Frederick Douglass, Incidents in the Life of a Slave Girl (Harriet Jacobs), Beloved (Toni Morrison), Gulliver’s Travels (Jonathan Swift), 100 Years of Solitude (Gabriel Garcia Marquez), and The Diary of Anne Frank. 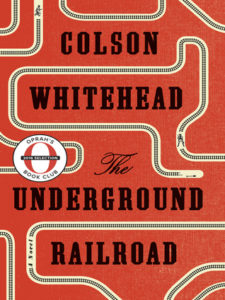 More thematically, Whitehead uses the common trope of the Journey, which happens both physically and psychologically. Cora is literally journeying away from the Randall plantation towards freedom, but she also journeys toward a knowledge of herself and her own identity, towards an intellectual and emotional freedom as well as a physical freedom.

The feminist in me applauded Cora as a female protagonist on her journey to freedom — too often, the woman’s journey is a journey to heterosexual Love, as if the masculinist author can’t imagine a woman’s goal to be anything other than a man. Whitehead, the reader, and Cora herself know that she cannot even think about romantic love until she begins to have a sense of herself as a force in the world around her.

Whitehead also draws upon the motif of the missing mother, so common in fairy tales (and Disney movies). As the only slave to have escaped from the Randall plantation, Cora’s missing mother Mabel symbolizes a myriad of ideas to many different people throughout the novel.  To most of the remaining slaves, Mabel is a beacon of hope – all of the others who attempted escape were caught.  For Ridgeway, the diabolic slave catcher, Mabel represents anger and vengeance – she eluded him and he collected no reward. Cora herself feels resentment and hopelessness and loss towards Mabel; she wonders how her mother could have left her in slavery, could have abandoned her only child in hell. I don’t think it’s a spoiler to say that the revelation about Mabel towards the end of the novel is incredibly emotional and exhausting and beautiful.

Finally, I’m wondering about one of the minor characters in the novel. Maybe it’s just because I have Homer on the brain because of last summer’s Odyssey odyssey, but I’m still very troubled about the minor character of Homer who haunts the end of the novel. Homer is a free black teenager who works for Ridgeway, the slave catcher. Each night before he goes to sleep he chains himself to Ridgeway’s wagon; each day, he helps Ridgeway to brutalize the enslaved men and women they capture. This character is unsettling in many ways, one of which is that he’s named after the poet who wrote the Iliad and the Odyssey, the two great originary epics of western civilization. If the opportunity presents itself, I plan to ask Whitehead about his Homer, and I’ll tweet or blog about his response.