The Massachusetts Medievalist spent part of January immersed in two very different poets, creating an interesting dialogue to start the spring semester. A chance sighting of a Twitter notice led me to Ocean Vuong’s prize-winning Night Sky with Exit Wounds and I read it almost simultaneously with Emily Wilson’s new translation of The Odyssey.

Wilson has been all over the news as the first published female translator of the Odyssey in English, with reviews and interviews on NPR, the New York Times, and the Endless Knot as well as myriads of others.  From her first line, “Tell me about a complicated man,” Wilson makes Odysseus and his journey home from war into a nuanced narrative that presents Odysseus not as unceasingly heroic but as a multi-faceted, dynamic protagonist who is, well, complicated.  Wilson does not elide the slavery of the Odyssey (she is relentless in her presentation of “slave girls” rather than the more usual “servants” or “housemaids”); she does not attempt to explain or excuse Odysseus’s sexual infidelities or narcissistic behavior. All this complexity makes Wilson’s Odysseus seem almost postmodern, and I mean that in a very positive way. 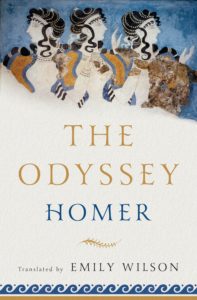 I had never even heard of Ocean Vuong — any of my students will agree that contemporary poetry is not one of my strengths — but decided to investigate when I heard that the UMass Amherst professor had won the world’s most distinguished prize for poetry in English.  Vuong’s work is starkly beautiful and deeply unsettling (the most common modifier for both “blue” and “black” is “bruise”) and sometimes-oblique, sometimes-candid references to violence, both domestic and institutional, pervade his lyrical, astounding lines.

It is fitting that he won the T.S. Eliot prize, since there are numerous covert allusions to The Waste Land throughout the collection (aesthetic association with Eliot’s work is not a criteria for the prize). Explicit allusions to the Trojan War deepen that connection. Vuong’s Troy poems extend Eliot’s connections of classical and modern warfare both chronologically and geographically: Vuong’s Troy is Saigon of the 1960s and 1970s as well as the entire contemporary United States. The second poem in the collection is “Telemachus,” thus placing his speaker in the position of the son seeking the father lost in war. Rather than Homer’s cathartic reunion scene, however, Vuong shows us irrevocable loss: “But the answer never comes. The answer / is the bullet hole in his back, brimming / with seawater” (10-12). Both “Trojan” and “Aubade with Bruning City” similarly make us see the intimate and personal effects of war; Vuong strips away any remnants of Homeric, victorious adrenaline, forcing us to look at the way that “They will see him / clearest / when the city burns” (25-27). 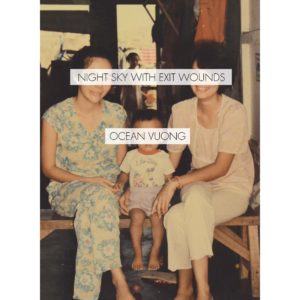 These three poems with Homeric allusion in the titles occur at the beginning of the collection, but then Vuong returns to Troy towards his close. “Odysseus Redux” explicitly refers to the Odyssey only in its title, but the themes of necesarily incomplete homecoming and reunion continue to resonate as the speaker tells us that “Back from the wind, he called to me / with a mouthful of crickets –” (7-8). Vuong’s poetics, so different from Homer’s and Wilson’s in form, wrestle with the same issues of identity, family, nation, sexuality, and loss.

Vuong’s and Wilson’s work reminds me that our culture’s foundational narratives are alive, part of our changing landscapes and conversations. It’s exciting to leave the Middle Ages every now and then to see how our conteporary poets are looking, Janus-like, both backwards and forwards in literary history.